RA is a chronic, progressive, systemic inflammatory disorder in which the joints are the primary target. The classic presentation of RA is a symmetric polyarthritis, particularly of the small joints of the hands and feet. Early arthritis is often accompanied by constitutional symptoms such as fatigue.

The etiology of RA is unknown. The pathophysiology of RA is presumed to relate to a persistent immunologic response of a genetically susceptible host to some unknown antigen, possibly an infectious agent. Many infections have been suggested as the cause of RA (including mycobacteria, streptococci, Mycoplasma, Yersinia, rubella, Epstein-Barr virus). Despite the resemblance of RA to known infectious arthritides (e.g., Lyme disease) and extensive investigations, no single agent has ever been conclusively implicated. Recently, environmental factors have been implicated in the pathogenesis of RA – with the risk and severity decreasing with alchohol use or, increasing with obesity, periodontal disease, and smoking.

Genetics: Family studies demonstrate some genetic predisposition to the development of RA. However, the concordance rate for monozygotic twins is only approximately 15% (i.e., if one twin has RA, there is a 15% chance that the other will develop RA). First-degree relatives of patients with RA develop RA at a rate approximately four times that of the general population. The most clearly defined genetic association with RA is with particular alleles of the class II major histocompatibility complex genes. Some HLA-DR molecules (e.g., HLA-DR4, HLA-DR1, currently designated HLA-DRB1*0401, 0101, 0404, etc.) are associated with the development and severity of RA.

Pathology: The most characteristic pathologic changes in RA occur in the joints. RA can affect any diarthrodial joint (i.e., joints with a layer of cartilage overlying bone, and a joint cavity that is lined by a synovial membrane and that contains synovial fluid). With the onset of arthritis, the normally thin synovial lining layer hypertrophies and becomes edematous and infiltrated with mononuclear cells. Below the synovial layer are organized accumulations of predominantly CD4+ helper T cells and antigen-presenting cells (dendritic cells and macrophages). Lymphoid follicles and germinal centers, more characteristic of primary lymphoid organs such as lymph nodes, can also seen in the rheumatoid synovium. In these areas, large amounts of immunoglobulin, including RF, are produced. Substantial vascular changes (e.g., angiogenesis) reflect activation of the endothelium of the synovial blood vessels. Fibroblast activity is reflected by increased synthesis of extracellular matrix components. This inflamed synovium distends the joint space, erodes into subchondral bone, and destroys cartilage. Such alterations are not pathognomonic of RA and may be seen in the other inflammatory arthritides. However, the intensity of such changes is characteristic of RA. The synovial fluid in RA is inflammatory in nature and contains large numbers of neutrophils. Rheumatoid nodules show palisading histiocytes arrayed about an area of central necrosis. Although uncommon, vasculitis of small- or medium-sized vessels has been reported.

Immunologically, several components of the immune system contribute to the pathogenesis of RA. Several lines of evidence indicate that activated CD4+ helper T cells orchestrate the immune response in RA. In addition to T cells, cells of the monocyte/macrophage lineage play an important role, both by interacting with T cells and by secreting various cytokines, chemokines, and other inflammatory mediators. Many manifestations of RA derive from the effects of proinflammatory cytokines, particularly IL-1, TNF-a, and IL-6. B cells play a role in RA, and can function as antigen-presenting cells, secreting cytokines and other mediators, and by secreting RF (usually IgM-RF, which binds to the Fc portion of IgG) that contributes to RA damage by forming immune complexes. Impaired apoptosis within the rheumatoid synovium may help sustain the ongoing immune and inflammatory activity.

The prevalence of RA is remarkably consistent; throughout the world, it affects approximately 0.8% of the population. Exceptions include the scarcity of RA in rural sub-Saharan Africa and a higher prevalence of RA (>5%) among some native North American populations. In all populations, women are affected approximately three times as often as men. The prevalence of RA increases with age, and sex differences diminish among older patients. RA develops most commonly during the fourth and fifth decades of life. Peak onset age (80% of cases) is between 35 and 50 years.  There is some evidence that the prevalence of RA has decreased in the last few decades such that ther are now 1.3 million Americans with RA.

Risk Factors: The greater prevalence of RA among women argues for some effect of sex hormones on the disease. This is supported by the tendency of RA to improve during pregnancy and with oral contraceptive use. Smoking may contribute to disease risk and risk of extraarticular manifestations, particularly among patients with antibodies to citrullinated proteins (ACPA). Historical evidence supports environmental exposures as potential risk factor for RA. Thus, unlike other types of arthritis such as OA and gout, it does not appear that RA existed to any great extent before the industrial age.

What are the symptoms?

RA is a clinical diagnosis, easily made by detailed history and thorough musculoskeletal examination.
—Onset: For approximately two-thirds of patients, the onset of RA is insidious; symmetric arthritis develops over the course of weeks to months. Approximately 10% to 15% of patients have a fulminant onset of polyarticular arthritis, and the diagnosis of RA is established more easily. Arthritis is often accompanied by prolonged morning stiffness affecting the joints that typically lasts an hour or more. Many patients also have constitutional symptoms such as fatigue, anorexia, and low-grade fever.
—Joints: Although the cardinal signs of inflammation (pain, swelling, erythema, warmth) may be seen early in the disease course or during flares, erythema and warmth may be absent in chronic RA. Warmth is often a subtle finding and erythema may be short-lived. Pain referred to the joint originates predominantly from the joint capsule, which is abundantly supplied with pain fibers and is exquisitely sensitive to distention. Factors that contribute to swelling of the joint include accumulation of synovial fluid and hypertrophy of the synovium. Initially, the patient may voluntarily restrict motion in response to pain. With progression of disease, tendon shortening and destruction of periarticular supporting structures may cause irreversible joint deformities (e.g., swan-neck deformity). Bony ankylosis (destruction of joints with collapse and bony overgrowth) tends to occur in some joints, particularly the wrist and ankle. Loss of function is critical to the patient because it is associated with interference with the ability to perform activities of daily living and substantial morbidity.

—Deformities: Damage to articular and periarticular (i.e., tendons, ligaments) structures may result in deformities (Figure), including swan-neck deformity (manifest as hyperextension at the proximal interphalangeal joints and flexion at the distal interphalangeal joints of the fingers); boutonnière deformity (flexion at the proximal interphalangeal joint and hyperextension at the distal interphalangeal joint), ulnar drift (deviation of the metacarpophalangeal joint and fingers ulnarly), piano-key deformity (with manual compression, prominent up and down movement of the ulnar styloid, caused by damage at the radioulnar joint), bent-fork deformity of the wrist (owing to collapse of the carpal bones with subluxation at the carpometacarpal joints, which re- sults in a step-down appearance over the dorsum of the wrist), and hallux valgus (valgus deformity affecting the first metatarsophalangeal joints, with medial displacement at the metatarsophalangeal joint and outward deviation of the first toe bilaterally).Although RA can affect any diarthrodial joint, there is a distinctive additive and symmetric pattern of involvement, with a predilection for the small joints of the hands and feet and certain large joints  (see Table). Some joints yield particular concern to patients; for example, arthritis of the hands and wrists interferes substantially with daily life and activities of self-care, while large joints (e.g., knees or hips) hamper mobility and often prompts patients to seek medical advice. 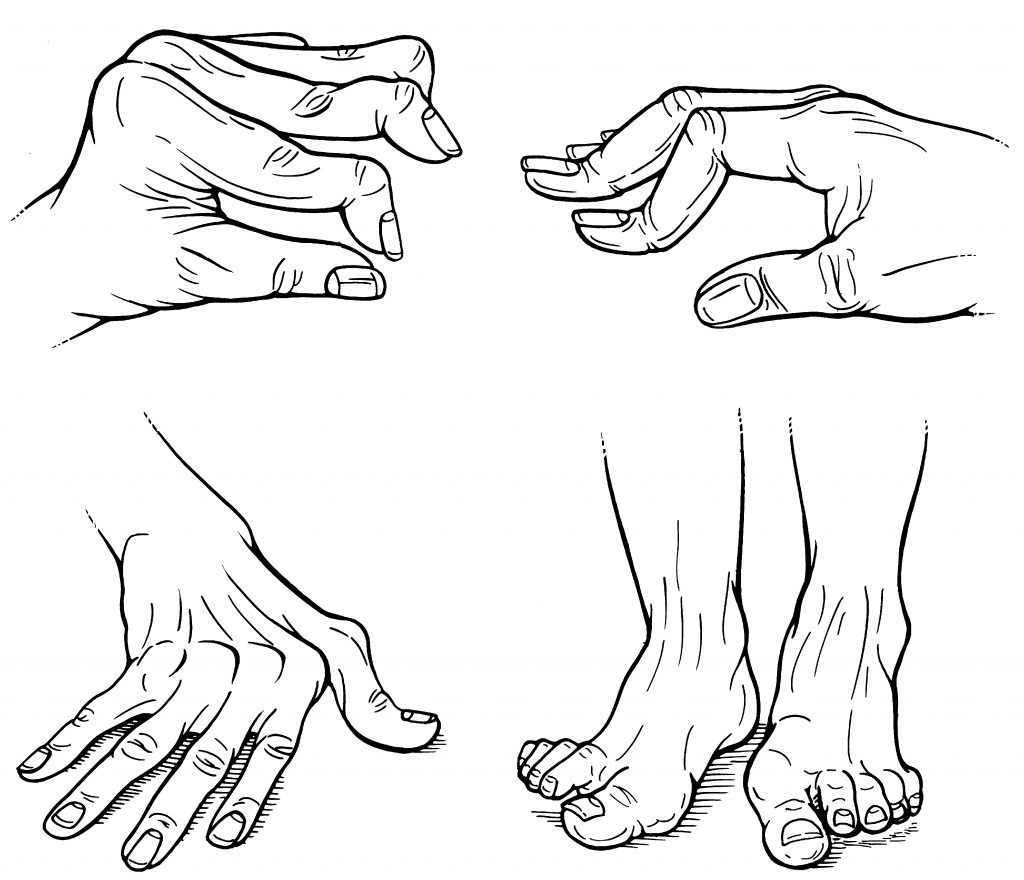 Complications: Joint destruction and deformities are the most common complications of RA. These changes can substantially impair the patient’s mobility as well as the ability to perform activities of daily living (e.g., preparing food, bathing, dressing). Extraarticular manifestations of RA may also cause complications (e.g., symptomatic pleural or pericardial effusion, vasculitic damage). Subluxation of upper cervical vertebrae is commonly seen on radiographs but is usually asymptomatic. Rarely, C1-2 subluxation results in spinal cord compression with permanent neurologic deficit. Rarely will pulmonary rheumatoid nodules erode into bronchi and cause recurrent or isolated pneumothorax.

Death: Patients with RA have an increased mortality rate and reduced survival by 10 to 18 years.  The leading cause of death in RA is cardiovascular events (especially in women), chronic lung disease, serious infection and neoplasia. These comorbid conditions are directly or indirectly the result of chronic uncontrolled systemic inflammation.  As such RA patients have higher rates of cardiovascular disease, infection, renal disease, neoplasia, and other comorbidities. Patients with RA have a nearly twofold increased rate of myocardial infarction, heart failure, and cardiovascular accidents. Interestingly, inflammation controlled by successfully treatment with MTX or TNF inhibitors results in better survival and a lower rate of CV deaths.  Although the overall cancer risk in RA is not increased and the standardize incidence rate (SIR) or relative risk approximates 1.  However, this is misleading as patients with RA have a lower rate of colon and breast cancer (owing to NSAID use) but are at increased risk of lymphoma (primarily non-Hodgkins lymphoma, lung cancer, non-melanomatous skin cancer and possibly a higher risk of melanoma or leukemia.  Lastly, patients with RA are at risk of serious infections. Pneumonia is the leading cause of death due to infection. Risk for serious, often hospitalized, infections is primarily related to:  1)  RA severity, inflammation and debility,  2) comorbidities (especially diabetes and chronic lung disease), 3)  corticosteroid use, 4) skin breakdown and surgery. With each morbid/mortal  risk, RA severity appears to contribute to this risk more so than the DMARD or immunosuppressive therapies employed.

How is it diagnosed?

No laboratory test is diagnostic for RA; rather, the presence of various laboratory findings provide support for a clinically suspected diagnosis.  Rheumatoid factor (RF) is the laboratory test most closely associated with RA. RF  is an autoantibody (usually IgM) that binds to the Fc portion of IgG and is present in 75% to 85% of patients with RA. Thus, nearly 20% of patients with RA are seronegative for RF. Moreover, cut-offs for a normal and abnormal RF lever are defined such that 4-5% of the general population test positive for RF.  Using these same “normal range” values, up to 15% of healthy elderly persons may be RF positive. In addition, an abnormal RF titer is seen in a number of conditions other than RA, including Sjögren syndrome, cryoglobulinemia, SLE, bacterial endocarditis, mycobacterial disease, hepatitis, and lymphoproliferative malignancies. Because RA is present in approximately 0.8% of the population, random screening using RF would be expected to generate a large number of false-positive results. In patients with RA, high-titer RF is associated with aggressive disease, as indicated by higher risks of developing bony erosions, extraarticular involvement, and functional disability.  The expanded use of ELISA assays for anti-cyclic citrullinated peptide (CCP) antibodies (anti-CCP or ACPA) and 14-3-3η  complement the profile provided by RF. Although anti-CCP antibodies appear to have nearly the same sensitivity (60%–70%) as RF, they appear to be more specific for RA (~95%) and are found earlier in the disease course and among those at risk of more severe outcomes.  Newer assays for anti-carbamylated antibodies show an association with RA and risk of radiographic damage, however their added benefit and commercially available is currently lacking.

Other laboratory tests that can be useful in supporting the diagnosis of RA include synovial fluid analysis, measurement of acute-phase reactants (ESR and CRP), and the CBC. In RA, synovial fluid is expected to be inflammatory (2000-60,000 cells/mm3) with a neutrophilic predominance (70-85% PMNs) and negative results on microbiologic culture and crystal analysis. Elevation in the ESR or CRP level provides a surrogate measure of active inflammation and may be useful in establishing a diagnosis, estimating the prognosis, and gauging the response to therapy. The most common abnormality in the CBC in patients with RA is a normochromic, normocytic anemia (anemia of chronic disease). Thrombocytosis may also be seen with uncontrolled inflammation. Although, nonspecific mild (two-fold) elevation of alkaline phosphatase is seen sporadically, other hepatocellular enzymes are normal in RA.